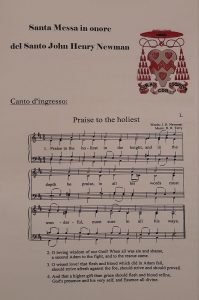 On 27 February 2021, the Mass in honour of St John Henry Newman took place, celebrated every year around his birthday (21 February) in the Chapel of the Palace of Propaganda Fide, where the altar on which Newman offered his first Mass as a Catholic priest is located.

In this year, which marks the 220th anniversary of Newman’s birth (1801), because of the pandemic only a small group of the faithful were able to attend the Mass, organised by the International Centre of Friends of Newman. The Eucharist was presided over by Fr. Hermann Geissler, F.S.O., Director of the Newman Centre. With their songs and hymns of Newman, three Sisters of the Spiritual Family The Work contributed to the festive character of the Mass, which was offered for all the friends of Newman and for the great intentions of the Church and the world in this time of pandemic.

In his homily, Fr Geissler, recalling that in his masterpiece Grammar of Assent Newman elaborates, among other things, “the distinction between notional and real assent”, sought to explain the meaning of this distinction. “What is expressed in these two concepts”, he began, “played an important role in Newman’s life. As a young man he had a notion of God, he had been introduced, especially by his mother, to the religion of the Bible. But he had no personal conviction, faith did not shape his life. Then, at the age of fifteen, he experienced his ‘first conversion’, which can be described as a step from a notional to a real assent to God. This experience made him rest in the thought of two self-evident beings: ‘myself and my Creator’. From this time on, God was no longer just an idea – he became a reality, the reality of his life. Consequently, Newman began a new stage of life, walking as a ‘believer’, in truth and towards holiness.”

“It is important to know the faith, to deepen our understanding of its content, to try to understand sound doctrine. But even more important is the second step: coming to a real assent to God or, as Newman said, ‘realising the faith’. Those who take this step, always under the influence of grace, let God into their hearts, thoughts and feelings, share their joys and sorrows with him, live in his presence. He feels carried, guided and protected by Him, even in times of trial and pandemic”.

Showing how Newman himself committed himself to the faith, Fr Geissler added: “He let himself be guided by God and by his ‘kindly light’. This light made him realise his vocation as a minister of the Church and as a professor at Oxford. It led him to dedicate himself to the study not only of Scripture, but also of the Church Fathers. It made him start and animate the Oxford Movement to renew his own community in the spirit of the Fathers. This same light helped him to find peace in the “haven” of the Catholic Church, after having been in a stormy sea. It gave him the strength to persevere, throughout his life, in the midst of so many challenges, sufferings and calumnies and – finally – made him a saint”.

Fr. Geissler then applied this insight from Newman to our own lives: “If we come to ‘realise the faith’, step by step, we too will be transformed in a threefold way. First of all, our faith will become more personal and will be expressed in ‘loving trust’ (Mother Julia), in a deep friendship with the Lord Jesus, in attentive listening to his word. Then, we will be transformed into witnesses. A person touched by the Lord in the depths of his heart cannot fail to have an impact on others. He speaks from heart to heart – ‘cor ad cor loquitur’ – he speaks with his life, his behaviour, his choices. And yet a third fruit: living in the presence of the Lord, we will be driven not to be easily satisfied with what we have achieved. We will look upwards, towards our goal, towards holiness. Whoever is conquered by God cannot but yearn for communion with Him. Jesus says in today’s Gospel: ‘Be perfect as your heavenly Father is perfect’ (Mt 5:48)”.

In conclusion, Fr. Geissler invited everyone to pray “that St. John Henry Newman may help us to deepen the treasure of faith, to know it better and better, but above all to realise it, reaching a deep communion with the Lord, who is for us the way, the truth and the life. May he be a ‘kindly light’ for each one of us and for the faithful throughout the world, even in these times of pandemic – to remain in friendship with him, to bear witness to him, to aim for definitive communion with him and all his saints”.

At the end of the Eucharistic celebration, Fr. Geissler invoked God’s grace on those present and on those who were spiritually united, blessing all with a relic of St. John Henry Newman. 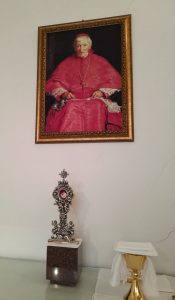