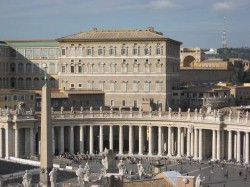 An important event for us was the fact that the prefect assigned to our study hall (there were no individual rooms) was a theologian only just returned from an English war prison. His name was Alfred Läpple, who later was to teach religious pedagogy in Salzburg and become one of the most renowned and prolific religious writers of our time. Already before the war he had begun work on a theological dissertation on the concept of conscience in Cardinal Newman, under the direction of Theodor Steinbüchel, a moral theologian in Munich. With his far-ranging knowledge of the history of philosophy and his taste for argumentation, Läpple became a great stimulus for us (Milestones, Memoirs 1927-1977, 43).

But, understood in the proper sense, a man who listens to his conscience and for whom the truth that he has recognized, the good, is above approval and acceptance, is really an ideal and a model for me. And personalities such as Thomas More, Cardinal Newman, and other great witnesses – we have the great men who were persecuted by the Nazi regime, Dietrich Bonhoeffer, for example – are great examples for me (Salt of the Earth, 67-68).

I don’t deny that there has been development and change in my life, but I hold firmly that it is a development and change within a fundamental identity and that I, precisely in changing, have tried to remain faithful to what I have always had at heart. Here I agree with Cardinal Newman, who says that to live is to change and that the one who was capable of changing has lived much (Salt of the Earth, 116).

In the idea of “development” Newman had written his own experience of an ever finished conversion and interpreted for us, not only the way of Christian doctrine, but that of the Christian life. The characteristic of the great doctor of the Church, it seems to me, is that he teaches not only through his thought and speech, but also by his life, because within him thought and life are interpenetrated and defined. If this is so, then Newman belongs to the great teachers of the Church, because he both touches our hearts and enlightens our thinking (L’Osservatore Romano, n. 22, June 1, 2005, 9; the full text)

For Newman, the middle term which establishes the connection between authority and subjectivity is truth. I do not hesitate to say that truth is the central thought of Newman’s intellectual grappling. Conscience is central for him because truth stands in the middle. To put it differently, the centrality of the concept of conscience for Newman is linked to the prior centrality of the concept of truth and can only be understood from that vantage point. The dominance of the idea of conscience in Newman does not signify that he, in the nineteenth century and in contrast to “objectivistic” neo-scholasticism, espoused a philosophy or theology of subjectivity. Certainly, the subject finds in Newman an attention which it had not received in Catholic theology perhaps since St Augustine. But it is an attention in the line of Augustine and not in that of the subjectivist philosophy of the modern age. On the occasion of his elevation to cardinal, Newman declared that most of his life was a struggle against the spirit of liberalism in religion; we might add, also against Christian subjectivism, as he found it in the Evangelical movement of his time and which admittedly had provided him with the first step on his lifelong road to conversion. Conscience for Newman does not mean that the subject is the standard vis-à-vis the claims of authority in a truth less world, a world which lives from the compromise between the claims of the subject and the claims of the social order. Even more, conscience signifies the perceptible and demanding presence of the voice of truth in the subject himself. It is the overcoming of mere subjectivity in the encounter of the interiority of man with the truth from God. The verse Newman composed in1833 in Sicily is characteristic: “I loved to choose and see my path but now, lead thou me on!” Newman’s conversion to Catholicism was not for him a matter of personal taste or of subjective, spiritual need. He expressed himself on this even in 1844, on the threshold, so to speak, of his conversion: “No one can have a more unfavourable view than I of the present state of Roman Catholics.” Newman was much more taken by the necessity to obey recognized truth than his own preferences – even against his own sensitivity and bonds of friendship and ties due to similar backgrounds. It seems to me characteristic of Newman that he emphasized the priority of truth over goodness in the order of virtues. Or, to put it in a way which is more understandable for us, he emphasized truth’s priority over consensus, over the accommodation of groups (Conscience and Truth, 10th Workshop for Bishops, February 1991, Dallas, Texas, USA; in: Benedict XVI and Cardinal Newman, p. 46).