Mary is the “Virgo Purissima,” the Most Pure Virgin 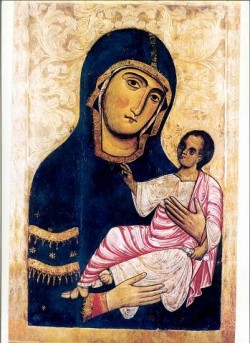 By the Immaculate Conception of the Blessed Virgin is meant the great revealed truth that she was conceived in the womb of her mother, St. Anne, without original sin.

Since the fall of Adam all mankind, his descendants, are conceived and born in sin. “Behold,” says the inspired writer in the Psalm Miserere-“Behold, I was conceived in iniquity, and in sin did my mother conceive me”. That sin which belongs to every one of us, and is ours from the first moment of our existence, is the sin of unbelief and disobedience, by which Adam lost Paradise. We, as the children of Adam, are heirs to the consequences of his sin, and have forfeited in him that spiritual robe of grace and holiness which he had given him by his Creator at the time that he was made. In this state of forfeiture and disinheritance we are all of us conceived and born; and the ordinary way by which we are taken out of it is the Sacrament of Baptism.

But Mary never was in this state; she was by the eternal decree of God exempted from it. From eternity, God, the Father, Son, and Holy Ghost, decreed to create the race of man, and, foreseeing the fall of Adam, decreed to redeem the whole race by the Son’s taking flesh and suffering on the Cross. In that same incomprehensible, eternal instant, in which the Son of God was born of the Father, was also the decree passed of man’s redemption through Him. He who was born from Eternity was born by an eternal decree to save us in Time, and to redeem the whole race; and Mary’s redemption was determined in that special manner which we call the Immaculate Conception. It was decreed, not that she should be cleansed from sin, but that she should, from the first moment of her being, be preserved from sin; so that the Evil One never had any part in her. Therefore she was a child of Adam and Eve as if they had never fallen; she did not share with them their sin; she inherited the gifts and graces (and more than those) which Adam and Eve possessed in Paradise. This is her prerogative, and the foundation of all those salutary truths which are revealed to us concerning her. Let us say then with all holy souls, Virgin most pure, conceived without original sin, Mary, pray for us.

John Henry Newman, Meditation for the Month of May. On the Immaculate Conception. in: Meditations and Devotions, Christian Classics, Westminster 1975, p. 8-12.