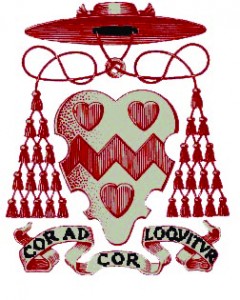 Rome in the life of Saint John Henry Newman: A Walk in the footsteps of Newman

Rome played an important role in the life of Saint John Henry Newman. He travelled four times to the Eternal City, the geographic centre of the Catholic Church.

During his first visit in the spring of 1833, a thirty-two year old Newman looked upon Rome with mixed feelings. On the one hand, he admired the beauty of the City and knew that from it England had received the Christian faith through missionaries who had been sent from her seven hills. On the other hand, he shared the firm conviction of many of his contemporaries that Rome was the seat of the Antichrist.

Newman was received into the Catholic Church at Littlemore in Oxford, on October 9, 1845. One year later, at the end of October 1846, he came to Rome again in order to prepare himself, along with his friend Ambrose St. John, for ordination to the priesthood and to find his vocation within the Church. He lived in the college of the Propaganda Fide, conversed with many people –, above all with the most renowned theologian of the Collegio Romano, Fr. Giovanni Perrone SJ –, and was ordained a priest on May 30, 1847. From July to December 1847, he stayed with some of his companions at Santa Croce in Gerusalemme during his novitiate in the Congregation of the Oratory of Saint Philip Neri. 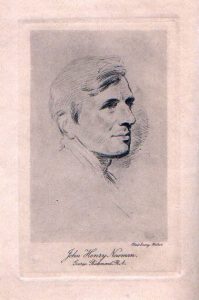 The reason for his third journey to the Eternal City at the beginning of 1856 concerned questions that had arisen in the understanding of his own vocation, which had alienated the Oratories in Birmingham and London. Newman wanted to clear up the tensions and facilitate a greater unity between the two Oratories.

He travelled to Rome for the fourth and last time in the spring of 1879. The newly elected Pope Leo XIII had decided to name Newman a Cardinal and thereby honour the Catholic Church in England. When he received the Papal bull appointing him as Cardinal, he gave the famous “Biglietto Speech” on May 12, in the Palazzo Maffei Marescotti. On May 15, Leo XIII held a public consistory creating Newman a Cardinal.

As you all know, travelling has been very difficult in recent months due to the Coronavirus-crisis, and as a consequence, almost no pilgrims and tourists came to Rome. Fortunately, the situation seems to be easing – albeit slowly – and we encourage you to continue your fervent prayers that humanity will soon be freed from this pandemic.

With this Newsletter, we invite you to make a pilgrimage to Rome that includes a Newman Walk through the Eternal City. In our local community, we mapped out a route that connects the most important Newman sites in Rome, and prepared this booklet that can serve as a guide. The booklet contains some brief information about nine Newman sites in Rome, as well as a number of inspiring quotations from Newman’s own pen. At each station, we have added a meditation, a prayer, and a song, so that the walk in Newman’s footsteps may truly also become a pilgrimage.

In the hope of meeting many of you in Rome and perhaps even accompanying you on the Newman Walk, we send you warm greetings from the Eternal City and recommend your personal intentions, the needs of the world, and the concerns of the whole Church to the intercession of Saint John Henry Newman.

With best wishes and kind regards,

Newman captures the lively charm of the two fountains in the Piazza of St. Peter.
He compares them to “two graceful white-ladies arrayed in the finest and most silvery dresses”: 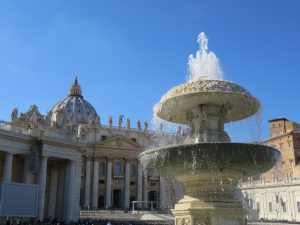 There is a highest jet in the middle and it is surrounded by a multitude of others, so contrived all,
that in falling they do not form a stream or look at all like water,
but are changed into the finest and most impalpable spray circling round the jets,
like the plumage of a swan or as I say the muslin of the white lady’s dress.
This dashes against a ledge, and then against another; –
so that the whole effect is such as I token by way of comparison – for describe the effect I cannot.
When the wind takes them, it is like muslin waving about.
(LD III, 264)