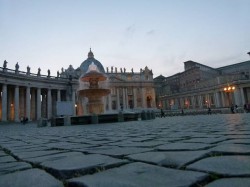 Long before the Anglo-Catholic Oxford don actually saw the city, its name must have resonated with John Henry Newman, evoking not just images of the ancient city, kingdom, republic and empire, its history of three thousand years, its rise and the fall, but also its huge claim to power and its unique culture of antiquity both pagan and Christian. Rome was not only a subject of special interest to the young Oxford student, but also the visible centre of the Catholic Church from the time of the apostles. Yet the don still had the conviction, learned as a boy at Ealing, that the Christian faith in Rome had over time become so corrupt as to be the work of Antichrist. The mere name of the city aroused in Newman notions, emotions and convictions both happy and painful.

to read more: Newman and Rome