“My soul has found a brother.”

The Spiritual Family The Work, which guides the International Centre of Newman Friends, was founded by Julia Verhaeghe. 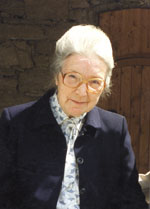 Mother Julia was born on November 11, 1910 in Geluwe in Belgium. She grew up in a large family of simple means. After the first world war and the difficult post-war years she worked from the age of 14 as a housekeeper for various families in Belgium and France to help support her family. Already in her youth God gave her deep interior experiences, especially while meditating on the letters of St. Paul. She testifies: “The holy Apostle Paul became an instrument of God for me, a spiritual guide and a beloved brother.” Later she was touched in the depth of her soul by the greatness of the merciful and just love of the Heart of Jesus and by the supernatural beauty of the Church. At the same time God gave her to understand to what a great extent the faith was weakened in many people and what an affliction the Church was facing.

After a period of suffering and purification she offered herself to our Lord, by means of a Holy Covenant, so as to share in His thirst for souls. Her spiritual director, Fr. Cyrill Hillewaere, priest of the Diocese of Bruges, perceived an interior call to make himself available for The Work in an act of surrender, and to accompany it as a priest. Mother Julia always regarded this day – January 18, 1938 – as the founding day of The Work. From that day on her only desire was to serve the Lord and the Church. She writes: “It pleased God to choose me to be an instrument for His Work according to His will. I feel interiorly impelled to say clearly that I never had the idea, never the intention, to found a Work. I have founded nothing. Since Christ founded the Church everything has been founded. It is only necessary that people live this foundation profoundly.”

Soon a small circle of young women gathered around Mother Julia, attracted by her faith, her zeal for souls and her love for the Church. Mother Julia accompanied the interior and exterior growth of the young Community with her motherly wisdom and with an astoundingly accurate eye for the signs of the times. With lively interest she followed the developments taking place in society and in the Church. Until her death on August 29, 1997 she strove to serve the will of God for The Work in total surrender of herself, also in the midst of affliction and trials. It was her wish to lead a hidden life in union with Christ, the King crowned with thorns, and to give herself as a spiritual mother for The Work and for the renewal of the Church. She is buried in the Thalbach Church in Bregenz, Austria.

In the 1960’s Mother Julia read a Newman anthology which touched her deeply. After finishing it, she said “My soul has found a brother.” In spite of different cultural backgrounds there is, in fact, a deep spiritual relationship between the writings of the well-known English Cardinal and the insights of Mother Julia: both were driven by a passionate search for truth and its practical realization; both stressed the necessity of a deep conversion and turning to God in faith, hope and love; both were filled with love for the Church and with a great appreciation for the doctrine of the faith and the sacraments; both possessed a holy reverence for tradition and were at the same time open for that which was new, which the Spirit of God brings forth at all times; both had a deep insight into the signs of the times and stressed the importance of a profound personal faith; and both were deeply concerned about the formation of conscience and the formation of the whole person.

From 1963 on, the Community spread outside Belgium in numerous dioceses in ten European countries, as well as in Israel and in Burkina Faso. In addition to the consecrated women, step by step God provided other vocations for this new Spiritual Family: priests, deacons and brothers, as well as families and single persons. From the beginning, Mother Julia knew that she was called, in accord with the Lord’s word to serve unity in truth and love, “ut omnes unum sint” (cf. Jn 17: 21-23). This unity was to find expression in the working together of the different vocations, especially in the complementarity of the Priests’ Community and the Community of Consecrated Women. The consecrated men and women commit themselves to a Holy Covenant through the three evangelical counsels. They are joined by other faithful (priests, married persons, single persons) who share in the charism in one way or another, without living in community with the consecrated members.

For several decades The Work was recognized as a Pious Union. Those responsible pondered the question of which juridical form of approval was most suited to the charism of The Work. Mother Julia had an inner certainty that it had to do with a new form of consecrated life. She wished to wait in patience until the Church recognized new forms. This possibility opened up with the new Code of Canon Law (1983) and the post-Synodal Apostolic Exhortation Vita Consecrata (1996). After careful examination by the Congregation for the Institutes of Consecrated Life and Societies of Apostolic Life, The Work was established on the diocesan level as a new form of consecrated life (1999). Only two years later (2001) the Community was granted papal approbation as a “Family of Consecrated Life.”

The purpose of this new Spiritual Family is to be a reflection of the mystery of the Church, in praise of the Holy Trinity and for the salvation of souls, and to give witness to its supernatural beauty as the Body of Christ and the Family of God. The members seek to help people to more profoundly understand the mystery of the Church and to be strengthened in love for her in view of the signs of the times. They try to cooperate in fidelity to the work of Christ (cf. Jn 17:4) and to do “the work of faith” (1 Thess 1:3, cf. Jn 6: 29). Spiritual sources are first and foremost the Most Holy Eucharist, Adoration and the devotion to the Sacred Heart, love for the Word of God and for the Church, union with God and with one another.

The members work in different pastoral, social, cultural and educational areas. Among other activities they care for the Newman Centres in Rome, Littlemore, Bregenz and Budapest, which developed after the first Newman Symposium in Rome in 1975.

Cardinal Joseph Ratzinger summarized the union between The Work and Newman on November 10, 2001, in the sermon he gave during the celebration in gratitude for papal approval. He said, “It is not by chance, I think, that The Work considers itself a friend of Newman, with his motto ‘Cor ad cor loquitur’. Mother Julia thought from the heart and knew the Heart of Jesus – this pierced Heart, which is the source of the Covenant, the source of our life – from the heart.”