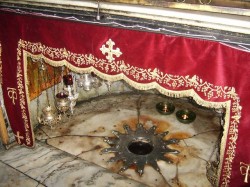 The Word was from the beginning, the Only-begotten Son of God. Before all worlds were created, while as yet time was not, He was in existence, in the bosom of the Eternal Father, God from God, and Light from Light, supremely blessed in knowing and being known of Him, and receiving all divine perfections from Him, yet ever One with Him who begat Him. As it is said in the opening of the Gospel: “In the beginning was the Word, and the Word was with God, and the Word was God.” If we may dare conjecture, He is called the Word of God, as mediating between the Father and all creatures; bringing them into being, fashioning them, giving the world its laws, imparting reason and conscience to creatures of a higher order, and revealing to them in due season the knowledge of God’s will. And to us Christians He is especially the Word in that great mystery commemorated today, whereby He became flesh, and redeemed us from a state of sin.

He, indeed, when man fell, might have remained in the glory which He had with the Father before the world was. But that unsearchable Love, which showed itself in our original creation, rested not content with a frustrated work, but brought Him down again from His Father’s bosom to do His will, and repair the evil which sin had caused. And with a wonderful condescension He came, not as before in power, but in weakness, in the form of a servant, in the likeness of that fallen creature whom He purposed to restore. So He humbled Himself; suffering all the infirmities of our nature in the likeness of sinful flesh, all but a sinner,-pure from all sin, yet subjected to all temptation,-and at length becoming obedient unto death, even the death of the cross.