On Monday, 29th February, the former home of Blessed John Henry Newman in Littlemore, Oxford known simply as The College, was the setting for a lecture on and reading of Newman’s historic Second Spring Sermon. In the same room in which Newman kept his library while living there, Newman enthusiasts gathered from Oxfordshire, Birmingham and as far away as Sussex. Sister Bianca Feuerstein FSO, member of The Spiritual Family The Work who are the custodians of The College, welcomed the group who filled the library. Mr Esme Howard, a Trustee of the charity that operates The College, served as Master of Ceremonies.

The evening began with a lecture by Dr Andrew Nash who explained the historical context of the sermon. Dr Nash set the scene, describing the wave of anti-Catholic agitation across England in response to the re-establishment of the Roman Catholic hierarchy in 1850.  When they met in Oscott College for their first synod, Father Newman preached ‘The Second Spring’. His sermon was given its title because Newman, after reflecting on the supposed demise of the Roman Catholic Church in England, spoke eloquently of how the Church had come miraculously back to life, that after the dead years of winter, there was now a “Second Spring”.  Newman spoke lyrically of this re-born Church, but warned of possible hostility from the world.

Dr Nash then considered whether Newman’s vision of a Second Spring for the Church came to reality. He concluded that it had, with the Church growing in numbers and Catholics playing a wider part in society.  Although recognizing a decline in Church attendance in recent decades, he nevertheless sees signs of hope. He also shared one scholar’s position that new movements in the Church are a fulfilment of Newman’s theology of the Church, concluding that ‘the Second Spring’ reminds us of the Church’s capacity for renewal. (SUMMARY)

Dr Nash, a retired English teacher, headmaster and Newman scholar, produced a critical edition of Newman’s Lectures on the Present Position of Catholics in England and is expecting his edition of Newman’s Essays Critical and Historical to be published next year. 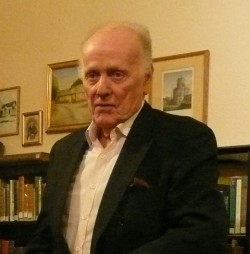 With this background and reflection about the Sermon, those gathered were ready to listen to Blessed John Henry Newman’s own words. In
an expressive and captivating delivery, actor Michael Wade recited large portions of the Sermon. His delivery, made entirely from memory, kept the audience enthralled. Some members of the audience were moved to tears. Mr Wade had recited the Sermon twice before, the first time in Westminster Cathedral before Cardinal Hume and members of the hierarchy of England and Wales to mark the centenary celebrations of the Cathedral in 1995. Last year, he recited it for the Friends of Westminster Cathedral. A professional actor, Michael Wade is known for his master-classes in Shakespeare and film. Mr Wade divides his time between London and Rio.

In keeping with Newman’s own love of music, the evening included a musical interlude: a piano recital by Claudio di Meo and Federica Nardacci who performed a short programme of Ravel and Beethoven, fittingly Newman’s favourite composer. Claudio is an orchestral and choral conductor, pianist and teacher. Federica is a musicologist, pianist and music teacher with wide experience in lecturing, academic research, performance and concert administration.

The Sisters of The Work expressed gratitude to the many volunteers who helped with the event including parishioners from the local parish of Blessed Dominic Barberi, members of the Oxford University’s Newman Society and Friends of the College.