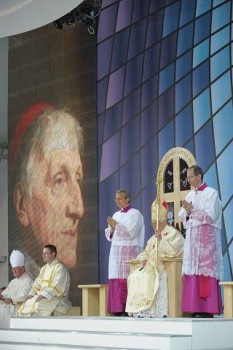 Many responses could be given to these questions, which were explored in the context of the beatification. I would like to highlight just two aspects which belong together and which, in the final analysis, express the same thing. The first is that we must learn from Newman’s three conversions, because they were steps along a spiritual path that concerns us all. Here I would like to emphasize just the first conversion: to faith in the living God. Until that moment, Newman thought like the average men of his time and indeed like the average men of today, who do not simply exclude the existence of God, but consider it as something uncertain, something with no essential role to play in their lives. What appeared genuinely real to him, as to the men of his and our day, is the empirical, matter that can be grasped. This is the “reality” according to which one finds one’s bearings. The “real” is what can be grasped, it is the things that can be calculated and taken in one’s hand. In his conversion, Newman recognized that it is exactly the other way round: that God and the soul, man’s spiritual identity, constitute what is genuinely real, what counts. These are much more real than objects that can be grasped. This conversion was a Copernican revolution. What had previously seemed unreal and secondary was now revealed to be the genuinely decisive element. Where such a conversion takes place, it is not just a person’s theory that changes: the fundamental shape of life changes. We are all in constant need of such conversion: then we are on the right path.

The driving force that impelled Newman along the path of conversion was conscience. But what does this mean? In modern thinking, the word “conscience” signifies that for moral and religious questions, it is the subjective dimension, the individual, that constitutes the final authority for decision. The world is divided into the realms of the objective and the subjective. To the objective realm belong things that can be calculated and verified by experiment. Religion and morals fall outside the scope of these methods and are therefore considered to lie within the subjective realm. Here, it is said, there are in the final analysis no objective criteria. The ultimate instance that can decide here is therefore the subject alone, and precisely this is what the word “conscience” expresses: in this realm only the individual, with his intuitions and experiences, can decide. Newman’s understanding of conscience is diametrically opposed to this. For him, “conscience” means man’s capacity for truth: the capacity to recognize precisely in the decision-making areas of his life – religion and morals – a truth, the truth. At the same time, conscience – man’s capacity to recognize truth – thereby imposes on him the obligation to set out along the path towards truth, to seek it and to submit to it wherever he finds it. Conscience is both capacity for truth and obedience to the truth which manifests itself to anyone who seeks it with an open heart. The path of Newman’s conversions is a path of conscience – not a path of self-asserting subjectivity but, on the contrary, a path of obedience to the truth that was gradually opening up to him. His third conversion, to Catholicism, required him to give up almost everything that was dear and precious to him: possessions, profession, academic rank, family ties and many friends. The sacrifice demanded of him by obedience to the truth, by his conscience, went further still. Newman had always been aware of having a mission for England. But in the Catholic theology of his time, his voice could hardly make itself heard. It was too foreign in the context of the prevailing form of theological thought and devotion. In January 1863 he wrote in his diary these distressing words: “As a Protestant, I felt my religion dreary, but not my life – but, as a Catholic, my life dreary, not my religion”. He had not yet arrived at the hour when he would be an influential figure. In the humility and darkness of obedience, he had to wait until his message was taken up and understood. In support of the claim that Newman’s concept of conscience matched the modern subjective understanding, people often quote a letter in which he said – should he have to propose a toast – that he would drink first to conscience and then to the Pope. But in this statement, “conscience” does not signify the ultimately binding quality of subjective intuition. It is an expression of the accessibility and the binding force of truth: on this its primacy is based. The second toast can be dedicated to the Pope because it is his task to demand obedience to the truth.

Address of the Holy Father