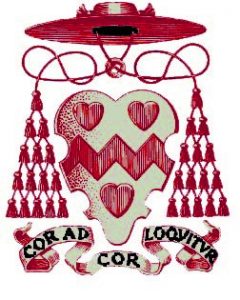 It is with great joy that we look back on October 13, 2019 when Pope Francis proclaimed John Henry Newman a Saint during a memorable ceremony on St Peter’s Square. Indeed many faithful all over the world had prayed and longed for this day. Leading up to the canonization and afterwards, there have been celebrations of thanksgiving and commemoration, conferences and various events in many countries in order to make known the new Saint, his person and his teaching to a yet wider number of people.

At the academic symposium “Newman – A Celebration”, held at the Pontifical Aca­demy of Sciences in Rome on October 12, 2019, one of the speakers was Cardinal Marc Ouellet, Prefect of the Congregation for Bishops. He presented a compelling paper titled “Cardinal Newman’s Significance for Catholic Theology”. We re­commend this theological lecture of His Eminence to your reading.

One of the repeated questions arising around the canonization was whether Newman could be declared a doctor of the Church. Fr Hermann Geissler FSO dealt with this question within a radio broadcast on Radio Maria. Please follow the link to find his contribution “St. John Henry Neman – a Doctor of the Church?” in which he pre­sents four works of Newman in a compact, straightforward way within the context of his life and thoughts.

This year’s Day of Study and Recollection was organized by our Roman Newman Centre on March 1, 2020. Professor Joseph Carola SJ underlined the role of the laity in Newman’s theological writings. His two conferences were greatly appreciated. Strikingly relevant, he mentioned a letter that Newman wrote while being off shore Malta during his first visit to the

Valletta (Malta) – on the lift: the Church, on the right: the Lazaretto

Mediterranean in December 1832. Newman was very impressed by a “poor fellow”, a Catholic, who was in quarantine in the Lazaretto, in front of which his ship was moored. On Christmas day this man faced a church across the harbour, and said his prayers. Newman felt ashamed that as the ship was loading coal, and the captain’s orders were precise, he himself, an ordained minister, was unable either to hold a service or visit a church. In a letter to his sister Harriett of December 25, 1832, he wrote: „This morning we saw a poor fellow in the Lazaretto close to us, cut off from the ordinances of his Church, saying his prayers towards the house of God which lay in his sight over the water – and it is a confusion of face indeed that the humble Romanist testified to his Savior in a way in which I, a minister, do not – yet I do what I can, and shall try to do more – for I am very spiteful” (John Henry Newman, Letters and Diaries, vol. III, pp. 162f).

Another peculiar fact during his first Mediterranean journey 1832/33 which included visits to some Catholic churches had been that Newman “did not observe the tabernacle lamp nor knew its meaning” (cf. LD, vol. XI, 131). When visiting Italy for the second time – thirteen years later, shortly after his conversion – he saw the sanctuary light flicker. It invited him from within all the churches he walked by in Milan. In a letter to Henry Wilberforce he wrote about it on September 24, 1846: “It is really most wonderful to see this Divine Presence looking out almost into the open streets from the various Churches, so that at St Laurence’s we saw the people take off their hats from the other side of the street as they passed along; – no one to guard it, but perhaps an old woman who sits at work before the Church door, or has some wares to sell” (LD, vol. XI, p. 252).

The real presence of the Lord in the tabernacle overwhelmed him. “The Blessed Sacrament is ready for the worshipper even before he enters” (Letter to Mrs. J. W. Bowden on October 1846: LD, vol. XI, p. 254). With regard to the present circumstances could one not today – as the public celebration of the holy Eucharist is often not possible in the usual way – as Newman did in his days – become aware of the wonder of God’s presence in the holy Eucharist in a new way? There Christ remains with us “I am with you always, even unto the end of time” (Mt 28:20). In any case we keep hoping and praying that the hunger for the true Bread of Life may grow in us and in many hearts in this time of trial.

In his homilies Newman invites us again and again to trust firmly in the Lord also in times of trial. He encourages us to ask this particular question: what does God want to say us amid difficulties and challenges? For in his Providence God does not allow anything without purpose even though we cannot see this immediately. New­man surely wishes to remind his listeners, too, that „He who imposed it [the trial] can take it away in His good time” (PPS VIII, p. 44). May we invite you to pray with us and with so many in our world that this hour may not be too far from us.

In the certainty that Saint John Henry Newman – especially at this time – intercedes for us before God’s throne, we wish you the best of strength, confidence and per­se­verance and send you our kindest regards “cor ad cor“.