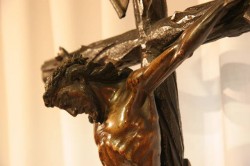 “And when Esau heard the words of his father, he cried with a great and exceeding bitter cry, and said unto his father, Bless me, even me also, O my father.” – Gen. 27:34.