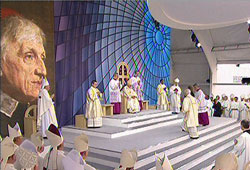 Homily of the Holy Father during the Holy Mass on the occasion of the Beatification of John Henry Newman at Cofton Park, Birmingham on September 19th 2010

Words of the Holy Father during the General Audience, September 22nd 2010:

“Sunday, then, was a moment of deep personal satisfaction, as the Church celebrated the blessedness of a great Englishman, whose life and writings I have admired for many years and who has come to be appreciated by countless people far beyond the shores of his native land.”

“Blessed John Henry Newman’s clear-minded search to know and express the truth in charity, at whatever cost to his own personal comfort, status and even friendships, is a wonderful testimony of a pure desire to know and love God in the communion of the Church. His is surely an example that can inspire us all.”

Part of an interview of the Holy Father Benedict XVI with the journalists during the flight to the United Kingdom.

Your Holiness, Cardinal Newman is obviously very important for you. For Cardinal Newman you are making an exception by presiding at his beatification. Are you of the opinion that recalling him can help to overcome divisions between Anglicans and Catholics? Also, what aspects of his personality do you intend to stress more?

The Holy Father: “On the one hand Cardinal Newman was above all a modern man, who lived the whole problem of modernity; he faced the problem of agnosticism, the impossibility of knowing God, of believing. He was a man whose whole life was a journey, a journey in which he allowed himself to be transformed by truth in a search marked by great sincerity and great openness, so as to know better and to find and accept the path that leads to true life. This interior modernity, in his being and in his life, demonstrates the modernity of his faith. It is not a faith of formulas of past ages; it is a very personal faith, a faith lived, suffered and found in a long path of renewal and conversion. He was a man of great culture, who on the other hand shared in our sceptical culture of today, in the question whether we can know something for certain regarding the truth of man and his being, and how we can come to convergent probabilities. He was a man with a great culture and knowledge of the Fathers of the Church. He studied and renewed the interior genesis of faith and recognized its inner form and construction. He was a man of great spirituality, of humanity, of prayer, with a profound relationship with God, a personal relationship, and hence a deep relationship with the people of his time and ours. So I would point to these three elements: modernity in his life with the same doubts and problems of our lives today; his great culture, his knowledge of the treasures of human culture, openness to permanent search, to permanent renewal and, spirituality, spiritual life, life with God; these elements give to this man an exceptional stature for our time. That is why he is like a Doctor of the Church for us and for all, and also a bridge between Anglicans and Catholics.”